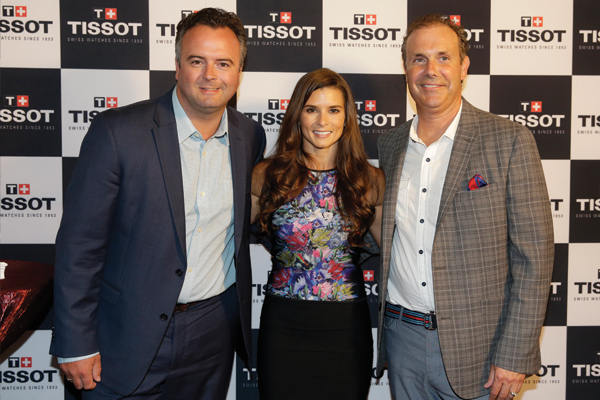 2015 marks ten years that Tissot has partnered with one of NASCAR’s most beloved racers, Danica Patrick. Known for fearlessness, innovation, and precision, Danica’s dedication to her sport mirrors Tissot’s commitment to creating quality Swiss watches at an accessible price. To commemorate this milestone, Tissot has created Danica’s tenth limited edition watch, the Tissot PR 100 Chronometer Danica Patrick Limited Edition 2015. The watch, like Danica, is glamorous, sporty and the first of its kind with a quartz chronometer movement, officially certified by the COSC (Contrôle official Suisse des Chronomètres).

A Decade of Danica
Danica has set many records over the years, and today is the most successful woman in the history of American open-wheel racing. She adorns the racing number 10, which is celebrated in this limited edition timepiece with a special index at 10 o’clock featuring 10 top Wesselton diamonds. The caseback is engraved with Danica’s signature logo. A timepiece like no other, this Tissot PR100 Chronometer Limited Edition 2015 is available in only 100 pieces. Be one of the few to own this commemorative piece that celebrates a winning nature and determination for greatness.are expected to be offered for viewing at Basel World 2016.