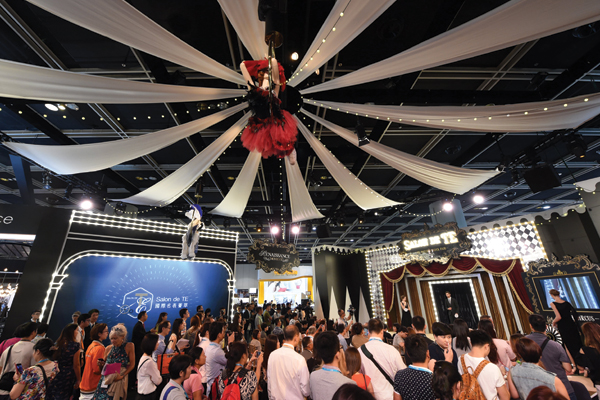 The 34th edition of the Hong Kong Watch & Clock Fair ended its five-day run (8-12 September) at the Hong Kong Convention and Exhibition Centre yesterday. The fair, which is the largest marketplace in the world for the timepiece industry, welcomed more than 19,600 buyers, up two per cent over the previous year.

Hong Kong companies pushing ahead
“Hong Kong Watch & Clock Fair provides an ideal platform for the industry to network and conduct business. Although Hong Kong’s watch and clock industry has to battle rising rents and operating costs, it has been able to push ahead using its versatility and creativity,” said HKTDC Deputy Executive Director, Benjamin Chau. “The mid-range affordable luxury products Hong Kong has launched, the smart watches and accessories it developed and the e-tailing channels it opened, have attracted global attention. Although the effects of the debt crisis still loom in Europe, the United States is steadily recovering, and we believe the outlook for Hong Kong’s watch and clock industry remains steady.”

Industry players eye the Asia-Pacific market
Asia-Pacific consumers are becoming increasingly savvy about quality watch brands, and the European watch and clock industry - long revered for its design and craftsmanship – used the Watch & Clock Fair as a platform to develop the Asia-Pacific markets. Peter Henriksen, Copenhagen Watch Group CEO, said his company had met with buyers and distributors from Australia, the Chinese mainland and Singapore, and would be confirming the partnerships after further discussions.