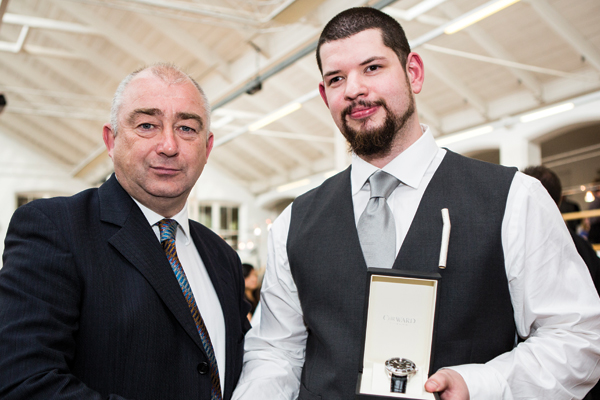 British watchmakers Christopher Ward are helping support the future of the British watch industry by expanding the brand’s links with the School of Jewellery at Birmingham City University (BCU).

As one of only a handful of UK-based watch designers and manufacturers, Christopher Ward are supporting the university’s specialist BA Hons degree in Horology, the only degree course of its kind in the UK. The specialist course at BCU is designed to train and create employable students in horology, tailored to meet the growing global demand for watchmakers and clockmakers, qualified to the industry standard.
Building further on Christopher Ward’s participation with the degree course in 2014, which included 2 summer placements based principally in the company’s technical and servicing department, BCU students will be offered further work placements as well as mentoring opportunities by the senior team at the independently owned, Maidenhead-based business.
BCU students will be able to undertake placements of up to four weeks with Christopher Ward, not only helping them to develop their technical skills in a working environment but also giving them an insight into how the brand operates as a business and as a relatively small British brand in an industry dominated by the Swiss giants.
Chris Ward comments: “As relative newcomers to the world of Horology, in our first decade Christopher Ward have developed a passion for injecting life into the future of British watch industry. Unfortunately, as a nation we are far removed from the possibility of creating a self-sustainable watch making industry but that’s not to say it won’t happen in the future. As a starting point it is crucial that we equip enough young specialists with the skills to work professionally in the industry; whether that’s primarily as watch technicians as at present or, in the future, hopefully as designers and makers.  As a British brand we are delighted to play our role in supporting that future and we look forward to developing stronger links with the fantastic work done by BCU and other organisations that are slowly helping British watchmaking to develop a stronger and sustained presence.”
Jeremy Hobbins, Course Director and Deputy Head of the Birmingham School of Jewellery, adds: “I am delighted to have the opportunity for my students to spend time with Christopher Ward at different times throughout the year.  They learn such a lot from experiencing a real world work environment with a niche British brand, and are able to explore all aspects of an exciting independent watch business.”
The School of Jewellery at BCU Birmingham was established in 1890, a peak period of the British watchmaking industry, and this year’s graduates are the first cohort to complete the new degree course that was launched in 2012, marking a relatively small but vital step in the  ‘grassroots’ revival for the UK industry