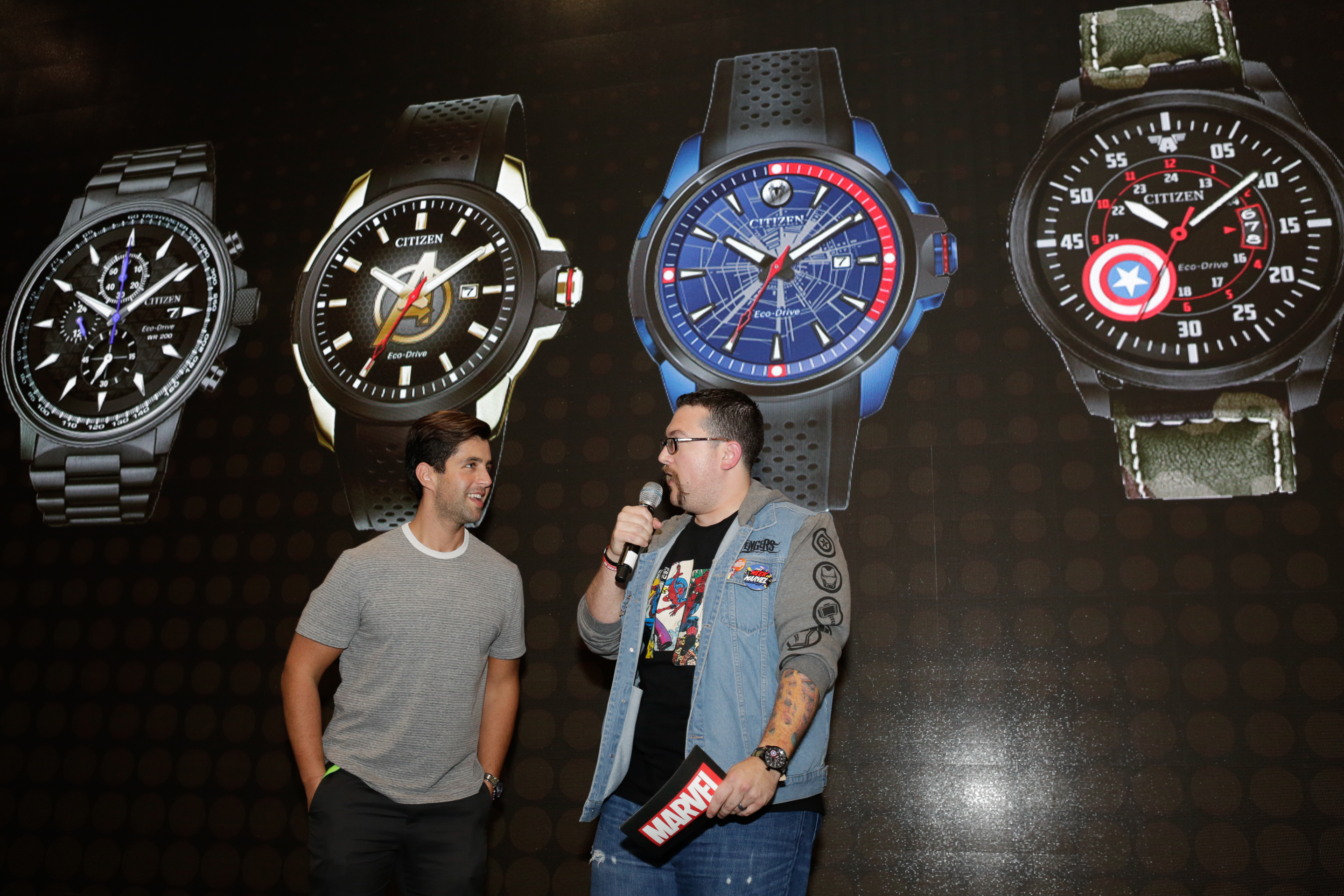 In celebration of the brand’s collaboration with Marvel, Citizen took the opportunity to unveil eight Marvel timepieces, inspired by some of Marvel’s most popular Avengers: Black Panther, Spider-Man, Captain America, and the Hulk.

Citizen kicked off the show on Thursday evening with actor, comedian and YouTube sensation, Josh Peck. Josh officially unveiled the timepieces and acted as the brand’s Comic Con representative throughout the weekend.

Starting the collection, Citizen unveiled two Black Panther timepieces both including a Wakandan-inspired tribal pattern on the dials and sharp silver indexes and hands, reminiscent of the pendants on T’Challas necklace. With violet accents on the dials, strap-back and case, Citizen pays homage to the energy emitted from his suit. The timepieces are complete with custom case backs featuring an etched mask detailing and Marvel logo.
Citizen went on to admire the rich comic history of all Marvel Super Heroes with one watch featuring panel artwork on the dial with vintage comics in a navy hue. One other Avengers timepiece is specifically inspired by the unity of the heroes, as they are strongest when they work as a team. Featuring the iconic ‘A’ logo in the center of the dial in a gold hue, the piece is predominantly black with red and gold accents evocative of the character costumes. Both case backs are finished with the signature Marvel logo.

With emphasis on his spectacular web design, Citizen created two Spider-Man centric timepieces featured in his iconic red and blue colors. A chronograph version is offered in stainless steel with bracelet and with the modern Spider-Man logo placed inside one of the chronograph sub-dials. The second version is featured on a black rubber strap with the SpiderMan logo at the 12 o’clock position and a white web spread across the dial.
Citizen proudly recognizes Captain America’s dedication to his country first. When designing the timepiece, the brand paid tribute to the character with his symbolic shield and ‘A’ insignia. The strap has camouflage detailing, recalling his history as a soldier in WWII, and the inner zone of the dial is featured with a 24hr military time track.

Lastly, the Hulk’s undeniable force is highlighted on one new timepiece with a famous Hulk ‘smash’ element. The dial features oversized Arabic numerals highlighted in green, as well as a heavy Buffalo grain strap that reflects the Hulk’s larger than life character.

All timepieces are priced from $275 - $625. “We are excited to share with everyone the first timepieces Citizen has exclusively designed for Marvel,” said Jeffrey Cohen, President, Citizen Watch America. “Earlier this year, we announced our partnership with Marvel and were highly anticipating the opportunity to create product around the many inspiring stories of Marvel characters and super heroes. We expect that all enthusiasts and fans alike will find a watch they can relate to and wear in support of their favorite character or for the unique design elements." “Marvel is thrilled to partner with Citizen to give fans a piece of the Marvel Universe to take with them wherever they go,” said Dan Cruz, Vice President, Digital Media & Integrated Sponsorships at Marvel. “As the sponsor of our Citizen Lounge, located at the Marvel booth at New York Comic Con, Citizen is the perfect fit for these Marvel-inspired timepieces, reflecting the incredible characters and stories fans have followed for decades.”

To sign-up to learn when the Marvel timepieces become available, please visit: CitizenWatch.com.